Stay Up To Date With AAUW’s NEW Advocacy Tool

Are you ready to take your advocacy to the next level? Opt in to AAUW’s Two-Minute Activist Mobile. This exciting new tool will allow AAUW to send more timely and targeted communication straight to your cell phone via text message. That means we can provide you with more strategic opportunities to take action when your advocacy can make the difference. Sign up online or text the word “AAUW” to phone number 21333 now to join.

Student loan debt is now a $1.3-trillion problem burdening 44 million borrowers. Experts are talking about the effects of student debt on the economy, but they aren’t talking about its disproportionate effects on women. AAUW takes a close look at that oversight in the new research report Deeper in Debt: Women and Student Loans. Register for the livestream launch event on May 24 or be the first to know when the report is released.
Read more.

The Paycheck Fairness Act will help secure equal pay for equal work for all Americans. But until that happens, each state will continue operating under antiquated regulations and piecemeal state and local laws to combat unequal pay. While some states do have stronger laws than other states, AAUW members will keep working to make the whole country a better place for women to live and work.

Find out more about your states.

Women have been running for president of the United States since 1872 — before women even had the right to vote.

Here are some of the women who have tried to crack the ultimate glass ceiling.

All members that are Special Registration Deputies (SRDs) can start registering voters after the August election in preparation for November.

Unfortunately many eligible voters (those who do not vote in primaries) have not yet registered or voted under the photo ID law. I am hoping to have a large AAUW presence for voter registration at UWM when school begins in Sept. We also will need help from those not SRDs to attract folks to register and hand out info about Voter ID. Please email me if you would like to become an SRD and I can provide details.

If you are interested in participating, please email or call (414) 426 – 4885 with dates in early September that will NOT work for you. I will aim for times most of us can be there.

Celebrate the 53rd Anniversary of the Equal Pay Act by Taking on the Student Loan Debt Gap
June 10 marks the 53rd anniversary of the Equal Pay Act. More than 50 years after the passage of this critical legislation, the gender pay gap remains a very real problem. When the law passed in 1963, women were paid 63 cents for every dollar men were paid. Today, women are paid on average 79 cents for every dollar paid to men. Although we have made strides, the gender pay gap still affects women’s economic security, including their ability to pay off student loans promptly.

To confront this serious issue, Rep. Tammy Duckworth (D-IL) and Sen. Tammy Baldwin (D-WI) introduced the In the Red Act (H.R. 5106/S. 2677), to make college more affordable for all students and help millions of borrowers across the country pay off their student debt.

Celebrate the 53rd anniversary of the Equal Pay Act: Take action with AAUW and urge your members of Congress to cosponsor the In the Red Act of 2016!

Loan repayment is a significant burden for women, who earn less on average over the course of their lives than their male counterparts. AAUW’s report—Graduating to a Pay Gap—found that the median student loan debt burden was slightly higher in 2009 for women than men. In addition, 53 percent of women and 39 percent of men were paying a greater percentage of their income toward student loan debt than they could afford.

The In the Red Act of 2016 would:
• Allow borrowers to replace their existing debt, both federal and private student loans, with a new loan that has a lower interest rate and better terms
• Ensure that Pell Grants keep up with the rising cost of living by indexing Pell Grants to the Consumer Price Index (CPI) beyond 2017
• Expand opportunities and access to education and the necessary credentials to succeed in the growing competitive job market by ensuring students have access to two years of community college tuition-free, saving a full-time student thousands in tuition per year

The Milwaukee Branch is planning to have Equal Pay Day tables at Alverno, Milwaukee School of Engineering (MSOE), UW-Milwaukee, and Marquette University on April 12, 2016.

At that time, we will provide information about pay inequity, AAUW, and Branch membership. 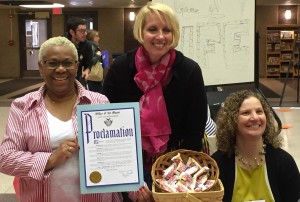 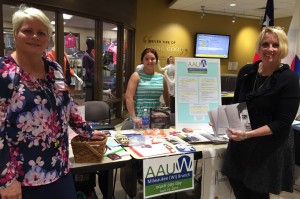 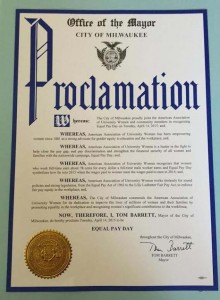